Warm Springs, where a president 'let it all hang out'

I wrote this story in 2007, but you can see some braces made by Marion Dunn for yourself. On Saturday, Jan 31, 2009 from 10 AM - 2 PM, Dunn's tools and several types of orthotics he made while employed at the Polio Foundation will be on display at Roosevelt's Little White House, 401 Little White House Road, Warm Springs, GA.

Marion Dunn was only 17 when he met President Franklin Delano Roosevelt.

A certified prosthetic and orthopedic technician, Dunn made the braces that FDR wore on his polio-stricken legs. Dunn was - and still is - a frequent visitor to the Little White House, Roosevelt's favorite retreat for relaxation and polio treatment in Warm Springs, Ga., located about 60 miles southwest of Atlanta.

"He joked and played around with employees," Dunn recalls. "There was one time FDR dunked a boy in the water and then roared back with a big belly laugh. He had a great laugh."

Dunn, who often brings homemade pies to the staff at the Little White House museum, says Warm Springs gave Roosevelt a chance to be himself outside the scrutiny of politics, the public and the press.

Roosevelt was infected with the polio virus in 1921 (although a study in 2003 said he may have had Guillain-Barré syndrome, a different neurological disease). He was paralyzed from the waist down and doctors said he would never walk again. (The polio vaccine would not come around until 1955.)

His relationship with Warm Springs began when he visited the area in 1924. At the suggestion of close friend and Georgia native George Foster Peabody, Roosevelt - at the time he had left politics to practice law in New York - traveled to Warm Springs because Peabody believed its warm swimming pools might help him. When in the pools, filled with natural mineral water from Pine Mountain springs that stayed at a constant 88 degrees, patients felt recharged and some, like Roosevelt, were able to freely walk about in the swimming pools.

But Warm Springs was not designed as a treatment center. From the 1890s until the 1920s, it was a place for the wealthy to relax. The Meriwether Inn, located on the property, was capable of housing 300 guests and keeping them entertained with a bowling alley, tennis court, trap shooting and swimming pools, among other amenities.

Roosevelt invested $195,000 of his personal fortune to buy 12,000 acres in Warm Springs and to rebuild the resort and make it a place that offered polio treatment. The land deal included the Meriwether Inn, cottages, swimming pools and the land on which he built the Little White House.

With Peabody and others, Roosevelt formed the Georgia Warm Springs Foundation (now the Roosevelt Warm Springs Institute for Rehabilitation), a center for treatment of polio. He consulted physicians and scientists on rehabilitation and worked with architects on the design of a new pool complex, which featured indoor and exercise pools.

Since there was no cure for polio at the time and patients were quarantined, Warm Springs and Roosevelt's foundation offered polio patients what they could not get in modern medicine - relief, acceptance and seclusion.

But Roosevelt's hope of restoring Warm Springs to a resort failed as the president learned firsthand the fear felt by people in regard to polio. The misunderstanding and lack of knowledge about polio kept visitors away because they believed swimming in the public pools would infect them with polio.

But it didn't prevent Roosevelt from visiting it often, and it was there that he died.

The last image
One of the most treasured pieces at the museum is the unfinished portrait of Roosevelt. It was on April 12, 1945, during a sitting for the painting that Roosevelt collapsed in the tiny living room at the Little White House. He was carried to his bedroom and pronounced dead at 3:35 p.m. His body was then taken to Washington, D.C. for a state funeral and Roosevelt was buried at Hyde Park, N.Y.

Greg Morrow says the room that holds the original portrait was designed by him and Burke. The room is equipped with lighting to preserve the painting for future generations.

It was at Warm Springs that Roosevelt found a purpose in life far beyond politics. His reputation before 1921 was that of a stoic, somewhat aloof aristocrat, but some would say that the small Georgia town warmed his personality as well. In his car, specially equipped with hand controls, Roosevelt traveled the country roads around Warm Springs and stopped to picnic or talk to people along the way, Dunn says.

"Roosevelt's experience in Georgia influenced him philosophically and politically," Burke says. "I hope everyone walks away with something positive."

"His programs and the things he did for rural people had me in awe of working at a presidential site," Morrow says. "They say when he came down here, he didn't realize how people in rural areas lived and it opened his eyes and it was what inspired him to begin all the social programs. Those programs started in Warm Springs."
Posted by Theresa

This was the sidebar to a story I wrote about Roosevelt's Little White House in Warm Springs, GA in 2007.

As the wind blows through the trees, Tom Wentland and Nancy Simko relax on the porch. Wentland adjusts his wheelchair while Simko focuses on the knitting project in her lap. Then Wentland spots an approaching visitor.

"Hi there, young man, and what is your name?" he asks. Shy and doubtful, the young boy is not sure if what he is seeing is real. He looks up to his mother for assurance and walks toward Wentland.

"So, do you have any questions for the president?" Wentland asks in a deep voice.

"Uh, no, sir." the boy replies, as he quickly makes his way to the door that leads back into the house.

Wentland is used to such perplexed responses from young visitors. After all, it is not every day one meets the 32nd president, Franklin Delano Roosevelt (FDR), especially since he died in 1944.

History comes to life on special occasions in Warm Springs, Ga., at the Little White House, getaway home of the former president. The porch is the stage for Wentland as he portrays FDR and for Simko as first lady Eleanor.

For Wentland, it has been a 16-year engagement and along the way he has gathered a lot of information about the only president to be elected four times. It's a commitment that he takes very seriously and one he says leaves him humble at the end of the day.

"It is an incredible honor to be able to step into his skin and make him seem alive, like to make people understand what that time was like, what our country was going through with the Depression," says Wentland.

"Some days you feel like cardboard cutouts," says Wentland. "Then there are some days here when ... well, they are humbling."

Wentland finds it difficult to finish his sentence but Simko looks up from her knitting.

"People thank him. We have had World War II veterans thank us," she says. "These moments are precious."

Wentland and Simko appear as FDR and Eleanor on special dates at the Little White House:

Sacred Encounters: from Rome to Jerusalem

If you are looking for a great book to read, I recommend Sacred Encounters: from Rome to Jerusalem by Tamara Park. 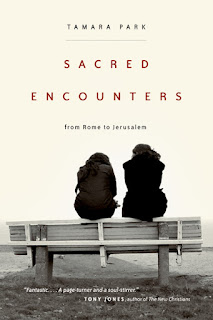 "Tamara Park signifies all that is good about the Christian pilgrimage. Her honesty and openness in Sacred Encounters from Rome to Jerusalem allow for a true spiritual journey in finding God. She is a contemporary pilgrim with a fresh journey to the living, breathing Yahweh."
Theresa Shadrix
Posted by Theresa