An honest and uncompensated review of Bronner: A Journey to Understand, written by Sherri Burgess. 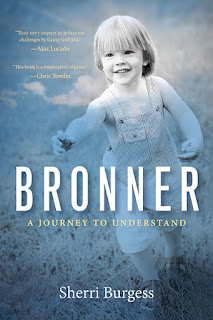 In the moments before, Brooks, 8, was playing Wii, Brody, 6, was watching a movie, and Bronner, 2, was playing with toys.

In the moments before, her plan for the rest of the night consisted of giving Bronner a bath and reading to him before bedtime.

In the moments before, her life was charmed and she was a princess living her happily ever after.

The answer would force her on her reluctant journey that offered no respite, no rewards for travel, and no earthly destination. The luggage required for her journey could not be contained in a rolling cart, but in the pages of the most cherished book of her faith. The ticket for her journey had been purchased on her behalf on Calvary.

As she saw him face down in the family swimming pool, she ran to her beloved baby and pulled him from the water. All efforts to breathe life into his body failed.

“My whole life – everything – was over. Not that I had given up yet. I thought he could be revived. I was hoping for resuscitation, but, even so, I knew that from that moment on nothing would ever be the same.” (p. 55)

Her life would never be the same and it was forever altered. However, it was not over. Her days were now measured by the moments before and she plunged into the one thing that had sustained her long before that night – Jesus.

Sherri mercifully prayed for God to save her son. She writes that God not only didn’t answer her prayer, but He knew what was coming.

“He, Himself, allowed it because He knew He could use it to bring glory to His name and to His kingdom, to bring lost souls to Himself, and to refine a couple of Christians who were too caught up in the things of this world.”

In Bronner: A Journey to Understand, you will read the details leading up to that moment the Burgess family was forced to reconcile to the fact Bronner would not be resuscitated.

I heard Sherri speak at a women’s conference at First Baptist Church of Anniston at McClellan a few years ago. What moved me was her love of scripture. She did not allow her grief to define her journey, but rather what God says. As she encouraged the women to be relentless in our pursuit of our Savior, it occurred to me that He had been preparing her for her journey long before Jan. 19, 2008.

Those who do not follow Christ can’t fathom that her unanswered prayer and her complete and total reliance on Christ could sustain her. But, that is the beauty in her journey.

She writes from honesty, from pain, and she writes from the joy in knowing that when she asks, “Where’s Bronner?” she can answer without hesitation that he is with our Heavenly Father.

This review is posted on Amazon as a verified purchase.
Posted by Theresa